To share your memory on the wall of Gene Shillinger, sign in using one of the following options:

Provide comfort for the family of Gene Shillinger with a meaningful gesture of sympathy.

Print
Gene LaMont Shillinger passed away on May 5th, 2020 at St. Peter Hospital in Olympia at the age of 76. The oldest of five children, he was born to George and Coy Shillinger on October 11, 1943 in Salt Lake City, Utah.

After moving to Ka... Read More
Gene LaMont Shillinger passed away on May 5th, 2020 at St. Peter Hospital in Olympia at the age of 76. The oldest of five children, he was born to George and Coy Shillinger on October 11, 1943 in Salt Lake City, Utah.

After moving to Kansas City, Missouri for several years, the family returned to the northwest, settling in Sedro Woolley, Washington. LaMont graduated from Sedro Woolley High School in 1961. While attending Skagit Valley College he met his wife Barbara House, and the two were married on October 18th, 1963. He graduated from Western Washington University in 1966 and then moved to Aberdeen, WA to begin his teaching career. He later completed a Master’s degree from the University of Idaho in 1970. Mr. Shillinger was a well-liked presence at Aberdeen High School for 33 years, teaching English, Photography, Journalism, and advising the newspaper and yearbook staff, among many other responsibilities. Upon retiring in 2002, he then taught at Hoquiam High School for 4 years.

LaMont was an accomplished photographer who specialized in weddings. He documented hundreds of weddings over the years, and had a particular fondness for the weddings of his former students. He was also a prolific volunteer to many service clubs and charities throughout his over 50 years in Grays Harbor County. Among those organizations were the Grays Harbor Community Clothing Bank, Saint Mary's Feed the Hungry, Salvation Army, Lion’s Club, Habitat for Humanity and the Aberdeen Museum of History. In the little spare time that he had, he loved to read, cook, bike, and attend his sons’ many soccer, baseball, and football games. In his later years, he especially loved spending time with his dogs.

LaMont is survived by his beloved wife of 56 years, Barbara. He is also survived by daughter Connie of Philadelphia, PA; sons Steven of Cosmopolis, Kirk of Vancouver, WA, and Corey of Tempe, AZ.; and 6 grandchildren. He is also survived by sisters Annette Shillinger of Renton, WA and Roxanne Collier of Bellingham, WA; brothers Kim of Astoria, OR and Mark of Kelso, WA.; as well as several nieces, nephews, and cousins. He was preceded in death by his parents, George and Coy; sons Eric (2013) and Kevin (2004); and niece Jamie Collier (2001).

The family requests contributions be made to PAWS of Aberdeen, Caring for Poor and Orphaned Children(CPOC), Habitat for Humanity of Grays Harbor, Lion’s Club Bicycles From Heaven or Chaplains on the Harbor. To share memories or express condolences, please visit www.harrisonfamilymortuary.com Arrangements by Harrison Family Mortuary of Aberdeen.

A celebration of life will be planned once social distancing guidelines are relaxed.
Read Less

To send flowers to the family or plant a tree in memory of Gene LaMont Shillinger, please visit our Heartfelt Sympathies Store.

Print
A celebration of life will be planned once social distancing guidelines are relaxed The family requests contributions be made to PAWS of Aberdeen, Caring for Poor and Orphaned Children(CPOC), Habitat for Humanity of Grays Harbor, Lion’s Club Bicycles From Heaven or Chaplains on the Harbor.

Provide comfort for the family with a meaningful gesture of sympathy.

Show you care by sending Flowers

We encourage you to share your most beloved memories of Gene here, so that the family and other loved ones can always see it. You can upload cherished photographs, or share your favorite stories, and can even comment on those shared by others.

Posted May 27, 2020 at 03:27pm
Sorry to hear about the passing of your father. I have great memories of playing at your house and the kindness of your dad.
Kirk, feel free to contact me. It would be nice to chat.
Comment Share
Share via:
AP

Posted May 25, 2020 at 01:14pm
I was so sorry to hear that LaMont has left us. He was such an integral part of Habitat for Humanity for me. We could always count on delicious platefuls of LaMont's cookies at every Habitat House Blessing and we could always count on the trays being empty before the end of the ceremony! LaMont and Barb were also regulars working in the Habitat for Humanity Elephant Ears booth. LaMont had a great sense of humor and he shared up fun stories and insights as we fried up Elephant Ears. He was such a kind, generous and caring person. You will be missed greatly by us all, LaMont.
Comment Share
Share via:
LC

Posted May 16, 2020 at 02:12pm
Lamont was a kind, caring and supportive colleague at AHS. He enriched the knowledge and lives of numerous students in our team-taught classes and improved my Jeopardy scores. He introduced me to Sourdough Starter and provided many recipes for my Life Skills classes. That knowledge proved a Godsend during this pandemic. I was only able to purchase yeast this past week. Furthermore, l’ve always been impressed by his comments expressing the pride he had for Barbra’s knowledge, skills and generosity to others. The world would benefit from more men of Lamont’s caliber.
Comment Share
Share via:
DK

Posted May 14, 2020 at 03:03pm
Mr. Shillinger was my Sophomore English teacher at Aberdeen High School. My fondest memory of him laughing. You see, I was was reading "Forest Gump" in Silent Reading - although apprehensive to allow me to read the book since it was already made into a "MAJOR MOTION PICTURE", I assured him that the book report would in no way shape or form resemble "Siskel & Eibert" critique.
On one particular Silent Reading day, Forest was being sent into space with a chimp. I ran out of the classroom, held my chortles in as I ran down the hall of the Philips Building to the exit doors, where I exploded into laughter. When I gained composure and reassured myself that it was safe to continue reading, Mr. Shillinger came to me, I sunk in my desk - I just knew I was in trouble for bolting out of the classroom.
His lanky frame hung over me and she bent slightly and asked me ever so quietly, "Since it's Friday - do you think I could read that over the weekend?" I looked at him with giggles in my eyes, "sure, but don't blame me for gut aches and laughing so hard you wheeze like an Old Man," to which he quipped "Oh, Miss King - I fully INTEND on all those things."
Returning to school that Monday - he was still laughing.
He was a great educator, a magnificent human being, and my friend. I will miss him dearly, but will forever remember that laugh and his ear to ear smile.
Comment Share
Share via:
DO

Posted May 14, 2020 at 02:07pm
Lamont was an inspiration! He helped and guided so many students to be the best they could be. Always had a smile on his face. I was blessed to be one of his students . We will miss him greatly!!!
Comment Share
Share via: 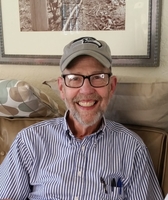