To share your memory on the wall of Anne Olsen, sign in using one of the following options:

Provide comfort for the family of Anne Olsen with a meaningful gesture of sympathy.

Print
Anne E. Olsen of Elma passed away on Wednesday, April 1, 2020 at the Beehive Retirement Community in McCleary, WA. She was 91. Anne was born November 14, 1928 in Tacoma, WA to James Franklin and Esther Rose (Schultz) Cooper.

Anne was ... Read More
Anne E. Olsen of Elma passed away on Wednesday, April 1, 2020 at the Beehive Retirement Community in McCleary, WA. She was 91. Anne was born November 14, 1928 in Tacoma, WA to James Franklin and Esther Rose (Schultz) Cooper.

Anne was raised in Tacoma and graduated from Lincoln High School. She attended Tacoma Community College and Evergreen State College.

Anne married Robert C. Olsen on May 3, 1946 in Tacoma, Washington. Anne was a school secretary in Tacoma, McCleary, and Elma from 1966-1983. From 1986-1995 she worked as a Confidential Secretary to the Director of Program Research for the Washington House of Representatives. She retired as an Office Administrator at AT&T Government Affairs. She was also a member of the Board of Directors for Planned Parenthood.

Anne enjoyed playing the piano and organ, analyzing data on her computer with Excel and Access, running her spinning wheel shop, researching genealogy, taking road trips with her grandchildren, and loved to eat out. She shared many favorite restaurants with her husband Robert.

She was preceded in death by her husband Robert. Anne will be laid to rest beside her husband at Satsop Cemetery.

On the day she passed, her daughters are sure that she was reunited with Bob, who took her out for breakfast (they would be holding hands under the table), and then they watched the Giants play a spring training game. Anne would be playing the organ and working on her computer, while Bob went to his study to work on his PUD conservation policies. They would finish their day at another restaurant and drive home sitting next to each other on the truck bench seat. They were best friends and lovers.

The family wishes to thank the staff of the Beehive Retirement Community for their loving care over the last 16 months and the staff of Harbor Health and Hospice.

In Anne's memory, please remember to follow your passions, watch musicals, tip well, always be kind and encourage girls to follow their dreams.

Memorials in memory of Anne are suggested to Planned Parenthood or Joe Biden for President. To share memories or to leave a condolence for the family please visit www.harrisonfamilymortuary.com
Read Less

To send flowers to the family or plant a tree in memory of Anne E Olsen, please visit our Heartfelt Sympathies Store.

There are no events scheduled. You can still show your support by sending flowers directly to the family, or planting a memorial tree in memory of Anne E Olsen.
Visit the Heartfelt Sympathies Store

We encourage you to share your most beloved memories of Anne here, so that the family and other loved ones can always see it. You can upload cherished photographs, or share your favorite stories, and can even comment on those shared by others.

Posted Apr 10, 2020 at 06:46am
I didn't personally know Anne but just read her beautiful memorial page and wish to send love to her and her family. Will think of her always when watching a musical, remembering to tip well and encouraging young women to follow their dreams. She seems like a wonderful woman and thanks for honoring her so beautifully.
Comment Share
Share via:
FM

Posted Apr 06, 2020 at 03:19pm
Anne was a wonderful woman and grandmother to our granddaughters. We enjoyed her intelligence and friendship and the love she had for her family. She and I used to enjoy going to lunch when we worked in Olympia. She and I had fun with our granddaughters Haleigh and Rebecca. She was a great mother in law to our son Brian. We appreciated that about her. We were able to take cookies to her this summer and to visit with her as she was in the assisted living facility. She and Robert enjoyed working with their environmental issues. Condolences to all of you family members.
Comment Share
Share via:
BM

Becky McNairy Anne and her family were a big part of my growing up on Roosevelt heights. There were so many memories with this wonderful family. They loved baseball and besides going to the games at Cheney stadium which usually ended up at Angleas restaurant in Tacoma for ice cream, we would play ball in their front yard. There were camping trips to Silver Springs. And annual pancake breakfasts were always looked forward to. Anne was normally a pretty calm person except for one thing, my pet parakeet, which was allowed to fly around my house. Ann always made sure that we had that budgie in it's cage when she'd come to visit my mom. She was very rattled by him. Anne was a lovely women who lived a good life. I was lucky to have grown up knowing all the Olsen's . My sympathies to Anne's family. 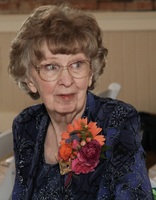