Memorial Candle Tribute From
Harrison Family Mortuary
"We are honored to provide this Book of Memories to the family."
View full message >>>
In Memory of
Robin Charles
Burmester
1935 - 2012
Menu
Send Flowers 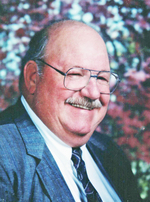 Robin Burmester died peacefully at his home in Humptulips, WA on September 7, 2012, with his family by his side after a heroic battle with pancreatic cancer.
Robin was born on July 18, 1935 to Raymond and Jennie (Robbins) Burmester in Clinton, Iowa. The family moved to Red Wing Minnesota when Robin was young where he grew-up and went to school. He came to Grays Harbor at the age of 22 after serving in the National Guard. He was first employed in a logging camp and then the chair factory and pulp mill before going to work for ITT Rayonier. Robin was a heavy equipment operator for Rayonier for 24 years. He joined the IWA Local 3-2 union early in his career and was a loyal and dedicated member where he served in many capacities including President. His work in the union led him to become the Vice President of the Washington State Labor Council. He was a champion for the rights of working men and women and their families.
Robin married the love of his life, Marylou Ellingson on November 23rd, 1970 in Montesano, WA. They raised their family in New London (Hoquiam) until retiring to the family ranch in Humptulips, WA in 1988. In retirement he continued to volunteer for the union and community and was always there for his family, friends and neighbors with a helping hand. At the family ranch Robin enjoyed caring for his horses and donkeys and he especially enjoyed the yearly haying of his fields. He was at home on his tractor. Robin was an avid fisherman where he enjoyed not only fishing on the Humptulips River that runs along his property but also enjoyed traveling to his home state of Minnesota and to Canada to fish with his brothers and friends. Robin enjoyed music and was a member of the S.E. Minnesota Blue Grass Association. He attended blue grass festivals with his brother Richard for many years in Minnesota. Robin also enjoyed camping and traveling with his wife and family. They traveled to many beautiful places including National and Historical Parks. His favorite places to visit where to Minnesota and especially his many excursions to Yellowstone. He was a geyser gasser, rock hound, and gold panner. Robin was also very artistic with several painting hanging in the family home. Robin was a loving husband to Marylou, a best friend and loving father to his daughter Cathy, a loving father to Daniel, Lori, and Randy and the best grandpa to his loving grandchildren Erica, Robin (namesake), Carlos, Casandra, Orlando, Clorissa, and Ali. Robin will be remembered for his kind, caring, and generous ways. He is loved very much and will be greatly missed by all.
Robin is survived by his wife of 42 years, Marylou; his daughters Cathy (Carl) Cozad & Lori (Angel) Garcia; his sons Daniel (Joni) Burmester & Randy Burmester; his grandchildren Erica and Robin Cozad; Carlos, Casandra, and Orlando Garcia; and Clorissa Burmester. He is also survived by his brothers Richard and Donny Burmester, and Jerry Novek; sister Joan Bundy; and aunt Josie Grabow. He was preceded in death by his parents, his sisters June Novek, and Mary Sandford, and step-son Steve Major.
A memorial service will be held at 1:00 pm on Saturday September 22, 2012, at the family home in Humptulips, WA. All family and friends are welcome.
Donations can be made to The American Cancer Society, 1313 Broadway Ste 100
Tacoma, Washington 98402.

To send flowers to the family or plant a tree in memory of Robin Charles Burmester, please visit our Heartfelt Sympathies Store.

Army National Guard
The insignias listed here may be subject to copyright and / or trademarked. Those copyrights and trademarks are owned by the respective organizations.
Printable
Share on Facebook